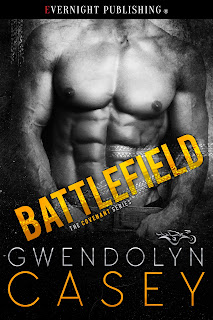 Hello Gwendolyn!  Thank you so much for visiting Written Butterfly with me today!  It’s such a pleasure to chat with you.  So tell me…


Battlefield is book 2 in The Covenant Series. The stories are based on three motorcycle clubs in the American Midwest that have formed an alliance.  Like so many other MC series, the concept was inspired by the TV show Sons of Anarchy, most specifically the character Jax Teller. Motorcycle clubs (or MCs) have become popular in the romance genre in the last few years, and I absolutely love it. I had soaked up so many of the MC novels that I just had to write my own.  The men of the Covenant are dark,  dangerous and alpha to the core. There is action, drama and a ton of sex (of course).  The first novel was titled Reign Over Me which I do recommend reading before Battlefield but it is not necessary. There is also a Covenant novella in the Lawless anthology titled Hungry Eyes. I have no idea how many books the series will actually have but I have at least 3 more in the pipeline, not to mention some spin-offs for non-MC characters that are equally bad ass.


Something interesting about the novel is the dedication. It is dedicated to all the people who have been waiting for the second book of the Covenant to come out. Reign Over Me came out in January of 2017 and Battlefield is being released a year and eight months later. I never wanted the wait to be so long.  But in that time, I have gotten a divorce and gone through a difficult custody battle all while maintaining a full time job and raising a toddler.  My time for writing was sparse. That is why I dedicated the book to those fans who have shown their support and gave me confidence when I really needed it.


I would say that my writing is a mix of the two but not on purpose. The first draft of my stories are always just what I want to write. So, I am original in the sense that I am not writing to please anyone but myself. However, I think my writing just naturally has elements that appeal to a lot of readers because I am a reader of the genre and have been for years. The whole reason I started writing romance was because I was tired of being disappointed in all the stories I was reading.  I would read the back cover of a book and be so excited about the concept. Then I would read it and be bummed that it didn’t go the way I wanted. They were just missing those elements that I came to crave in my romance. I imagine a lot of readers feel that way but might not have the inclination to become an author. So I like to think that my writing appeals to readers because they are looking for all the same dirty decadence that I am. Of course, there will be people who have their judgements but if I were to try and write any other way, I wouldn’t be having any fun. And what’s the point of that?


My characters are definitely developed while I am writing. In order to know the character’s personality, I literally have to write them into the scene and see how they come out at the other end. The Hero and Heroine are supposed to be dynamic, meaning they are meant to change and learn as the story goes on. I can have an idea of that change will be but it won’t be fully developed until I am nearing the end of the story when I have put them (and myself) through the scenes. 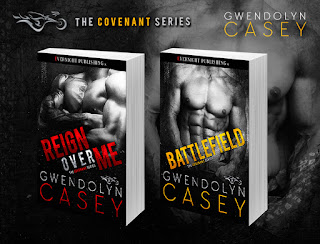 
As a member of the Aces MC, nothing in the world was forbidden to Jordan Mitchell and he was not in the habit of denying himself the things he wanted. But when he meets his younger brother’s girlfriend, he finally knows the torture of wanting something he can’t have.

Cecelia Taylor knew Jordan would be a mistake since the first time she met him. Not only was he a filthy biker but also an arrogant jerk who could never seem to keep his hands to himself. And yet, she couldn’t seem to resist those hands...or his bed.

Their relationship is a battle from the very beginning with casualties on both sides. But when Jordan’s past comes calling, their love is put to the test and they both have to decide if what they have is worth a real fight. 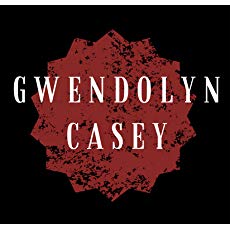 
Gwendolyn Casey was born to romance like a fish to water. Just ask her mother who had to play Cinderella every day from the age two to five. Of course, she eventually moved on to more respectable films like Grease, Cry Baby, and Dirty Dancing. But it wasn't until she read a Nora Roberts paperback that she discovered the pure joy of the romance novel. Gwendolyn has been writing romance ever since. She has a B.A. in English from the University of Iowa and currently lives in central Iowa with her young son, who provides her with motivation and an excuse to watch Cinderella again. Sign up for Gwendolyn Casey's mailing list at gwendolyncasey.com.
Posted by Beth D. Carter at 1:00 AM