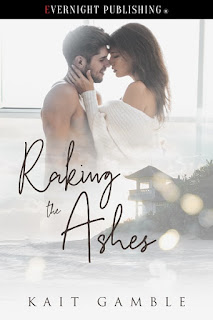 Hello Kait!  Thank you so much for visiting Written Butterfly with me today!  It’s such a pleasure to chat with you.  So tell me…


Hi Beth! Thanks for having me!


A) A bit of both. Authors becomes favourites for a reason. Readers expect certain things that you should try to give them while at the same time you have to stretch and grow as an author or else things get stagnant. It’s a balancing act.


A) Characters usually come to me in pairs with their conflicts already brewing. Since I’m a pantser I explore and build the dynamics as I write. I love when something new about the characters pops up while I write.


I’ve got a hitman romance on submission and am working on the next in my Sensation series as well as the first full story of my paranormal Fated series.


Blurb:
Lies tore them apart…
Tamara Roberts only wanted to live her life and write her novels. After living hard and fast in her youth, life now happened almost exclusively on the page for Tamara. Her carefully constructed life is torn apart when her long estranged husband makes an appearance on her doorstep looking too sexy for comfort.
Peter Worthington has one request before they part ways for good. That Tamara comes to make peace with his dying father. But the simple request comes with a huge tangle of complications. He never expected devastating revelations to be uncovered or for the chemistry between them to still be explosive. But will the truth bring them back together?
Extract:


“Don’t you ever do anything but work?”


Tamara Roberts looked up from her screen at her assistant and gave her a mild smile as she pushed a stray lock of dark hair out of her eyes. “The last I checked, yeah. I eat, sleep, breathe, watch the occasional movie.”


“Very funny.” Angela Parsons, PA par excellence, slumped into the chair on the other side of the table to smile at her boss and friend. Gentle concern was clear on her face. “You’ve got to get out there. Live a little.”


“I’ve lived plenty.” Hard, fast, and stupidly when she was younger. Tamara viciously stabbed the keyboard with her fingers as she finished a paragraph. They’d been through this many times before. Angela couldn’t seem to understand that not everyone needed—or wanted—to date wildly inappropriate men and party every weekend.


There was nothing wrong with wanting a quiet life. Work was more than fulfilling. Her writing was both a living and an escape. And it gave her a comfortable life. All pluses in her book.


“I’m just saying that being cooped up in the house all the time with nothing but your screen and the voices in your head for company can’t be great for you.”


“It’s more than enough, Angela.” Tamara picked up one of the many pens on her desk and jotted a note on a pad before she forgot about it. “Besides. I have you.”


“You need to find a man like the ones you write about.” She leaned forward, her beautiful red hair bouncing with her movement. “Smart. Sexy. Handsome. Won’t take no for an answer. Worships the ground you walk on. You know, the perfect man.”


Ignoring the man that came to mind at that description, Tamara shook her head. “There’s no such thing as a perfect man except on paper.”


“Oh, I don’t know about that. The guy I’m seeing this weekend seems promising.”


Tamara tapped her pen against her glasses. “You’ve said that about the last four men.”


“It’s different this time. Caleb is a winner. I can feel it.”


Tamara smiled as encouragingly as she could. Why Angela felt the need to go through the hassle of a relationship, no matter how short, was beyond her. “So…”


It took her almost a full three seconds to remember what they had been discussing before she went off on a tangent. Angela nodded. “Of course. I’ll get your blog sorted out. Was there anything else you needed?”


“Milk?” Tamara was already thinking about the hero’s final grovel. Angela didn’t usually need things spelled out for her. “I have a list on the fridge.”


“I’m on it.” She stood and stretched sinuously.


How can anyone be so innately sexual? Tamara shoved her glasses up her nose. Apparently, some people were just born with it. She, on the other hand, preferred to fly under the radar.


Angela made no move to leave, however.


“I just thought you might want to talk about what your editor said.”


Tamara bit the inside of her cheek. “It’s all good, Angela.”


“Really? Because it looks like your head’s about to explode just thinking about it.”


Why would she be upset over the fact that her editor said that her latest projects felt a bit ‘samey’? That her heroes lately were all barely redeemable jerks? That she needed to get out of her comfort zone and try something different?


Not upsetting at all.


Tamara was so okay with it that she had cried for a little bit. What was half an hour spent wallowing? Okay. It was an hour of wine and tears in the bath, but it was all part of a writer’s life, right? She knew she needed to evolve. And that was exactly what she was going to do with this new book.


Her PA’s voice cut through the reverie.


“If you say so. But you know I’m always here if you want to talk.”


Tamara couldn’t help but smile. “Thanks.” Angela was a true friend.


One who was currently distracted by something she saw outside.


When Angela continued to stand and stare, Tamara had to ask, “What’s up?”


She pointed. “If you wanted to get out of your rut and try something new, you should take a run at the guy outside,” Angela said approvingly. “Very hot.”


There was someone outside? Tamara couldn’t imagine who would go out of their way to search her out. True, she had some diehard fans, but she wrote under a pseudonym and, thanks to her reclusive nature, people who lived nearby had no idea who she was besides being the quiet writer. That was if they ever saw her stray farther than the mailbox.


She pushed her chair back and strode over to stand next to her friend. The instant she saw the familiar tall, broad-shouldered build clad in a fine dark suit, Tamara’s knees wobbled a little.


Even after nearly a decade, she still knew him on sight. She didn’t even have to see his face. And her body reacted with a force only he’d even been able to elicit from her.


As if he could hear her thoughts, he turned his head slightly to peer at the window where they stood. Tamara’s heart stuttered to a stop. What she already knew was confirmed.


Dark hair shorter and his face leaner than she remembered, he was still a fine specimen of the male of the species. One look at him always had the ability to knock the breath from her lungs.


Impossible. What would he be doing there?


Her first impulse was to hide. It would have been so easy to get Angela to answer the door and deny her being there, but it was obvious he knew she lived there. Why else would he be there?


“Tamara? Are you okay?” Angela’s bright green gaze bounced between her and the man outside. “Who is that?”


“You’re not reacting like he’s no one.” Alarmed now, she put her hand on Tamara’s shoulder. “You don’t think he’s a stalker or something, do you?”


“No.” Tamara watched him take long-legged strides up the boarded path with growing dread. “It’s my husband.”

An inveterate traveller, Kait has set foot on three continents and has the other four on her bucket list (yes, even Antarctica). Until she can see them all, she writes romances that take readers to far flung locales, often to places she’s been or hopes to one day go. For now, she’s settled in England where she spends most of her time plotting, scribbling ideas on every available scrap of paper and trying out dialogue on her cat.