Yeah, it happens to the best of us.  Life gets in the way and your brain is taken in another direction and before you know it, it’s been days or weeks since you last looked at that book you’re trying to write.  You’ve forgotten little details.  What eye color did you give your hero?  What town was your heroine born in?

Communication is, perhaps, one of the most important parts of a story. Not only between the good guys, but between the bad guy and good guy as well. Does this show how alike they are? Or does this conversation make it very clear how much the good guy needs to defeat evil? One thing to point out is that exposition can be very boring for the reader, so find a clever way to communicate what needs to be said in a way that doesn’t lose your audience.


If your hero and the antagonist had an honest discussion, what would they say to each other?

>List three locations or situation in which your hero and your adversary could talk at length.
> Brainstorm three characters your hero could confide in.


> Imagine a conversation between your hero and his/her younger self. What advice would he/she give.
> If your antagonist is a non-human (e.g.: a storm, an island, the alien in Alien) imagine it as a person. How does it speak? How would it describe what it wants?


Keep in mind that sometimes you don’t need to include these conversations into the story, but as the author, it could help you understand your protagonist and antagonist better. The best stories are when the two clashing forces have equally believable and necessary missions. You root for the hero but you also root for the antihero. Building dialogue can be a bridge that lets your readers choose which path to go. That’s great drama right there. 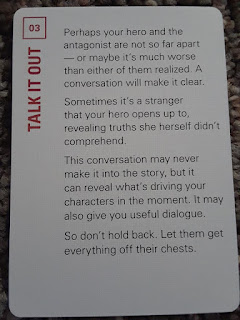 ***John August designed these cards to help writers fix plot holes, spice up stock characters and rethink your themes.  They, of course, do not guarantee you’ll get published or that you’ll become the next J.K. Rowling, and of course they are only a tool to help you think outside the box. I make no monetary gain with them nor do I expect anything in return.  I do not own the contents in these cards. If you're interested in them, here's the amazon link: https://www.amazon.com/Writer-Emergency-Pack/dp/B00R6ZLIOY/ref=sr_1_2?ie=UTF8&qid=1502046610&sr=8-2&keywords=john+august
Posted by Beth D. Carter at 1:00 AM