Blast from the Past...Spotlighting January Bain's "Racing the Tide" 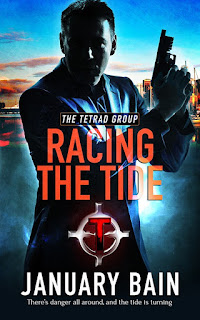 Racing the Tide, Book one in the TETRAD Group series

Cole and Gabby, undercover in Vancouver’s Chinatown, have no time for the attraction developing between them. Not when the race is on to rescue a kidnap victim before time runs out.

My name is Cole McClintock. My new job with the TETRAD Group has me working with a woman that’s gotten me so tied up in unfuckingbelievable knots that I’m a certifiable nut job. I mean, just look at her. The woman is beyond hot with those big doe eyes and luscious curves that makes me want to possess every single inch of her.

One look at Cole McClintock and knew I should stay right the fuck away from him. My name is Gabriella Banks and I’d be the first to admit I’m complicated, but at least my job as a new operative with The TETRAD Group keeps me too busy to dwell on my lack of a sex life. I never thought I’d be admitting this, but my strong-woman exterior hides a craving for something more—something only Cole can provide…

1, Did you plot this book out or write wherever an idea took you?

Aw, the perennial question: Plotter or Pantzer? Actually, I do a bit of both, a hybrid of knowing where I’d like the story to go and then listening to my characters as to where they see themselves going! This allows me to have a sense of solidity and yet adds a lot of creative juice to the experience. 😊

2. Do you believe a book cover plays an important role in the selling process?

I do believe a book cover plays an important role. It’s the first impression for attracting readers and it needs to say so much. What the story is about? Is the impression left that the book is well-crafted? Does the cover reflect the genre properly so readers get the story they want? My hats off to those that create the covers. A lot of thought goes into them. I feel blessed by the amazing covers that have been made for my series at Totally Bound Publishing. They are always beautiful and spot-on!

3.  Any advice you would like to give to your younger self?

Good question! Yes, definitely, relax more and enjoy the journey! I have worried too much about if I could figure things out in a story, but overtime, I realize there are many ways for plots to advance and that all is revealed when the right moment appears. Guess I do believe there is magic afoot when continuing exercising creative muscles! So far to date, after at least thirty books written, things have a marvelous way of working out that often surprises even me. I think read all you can is one of the best bits of advice I have ever been given.

He joined her in the cab, his eyes drawn to her lovely face, pain lancing him when he found it filled with worry, a sharp crease burrowing between her eyebrows while she chewed on her lips. The lips he had lost himself in only moments ago. It seemed like forever now, the sight a pure aphrodisiac. He reached over and drew her to him, rougher than he intended. Took that beautiful concerned face between the palms of his hand and claimed a kiss of those perfect pink lips. The effect startling, satisfying, essential, the electrical current between them bursting into flames.

He pressed harder, seeking the warmth within. His blood heated red-hot, coursing under his skin, tightening his cock until it felt about to burst free from his jeans, hard as steel. A moan. A gasp. The outside world dropped away, making only this moment, this second, all that mattered.

She softened into him across the annoyance of the center partition between the seats. He wanted to drag her right up close to him, push into her, fill her with himself. He was lost in her, grasping a full breast and finding the nipple hard, budded. The warmth of the pliant flesh sent him reeling. God, he wanted her. Wanted to have her stretched naked beneath him, wet for him. Wanted into the very core of her. Make me forget.

“Fuck, woman,” he murmured against her lips, “I have to have you. Now.” Their breaths mingled, heating the air around them, obscuring the outside world as moisture formed, clouding over the windows. It ran down the glass in rivets, like the tears of the world.

His hands pulled at her clothing until she began to help, shucking off her shoes, jeans and panties in one frantic movement. He unbuckled his belt and pulled down the zipper, yanked a condom from his pocket. She tore it from his hands and before he could get his jeans and boxers completely off, she was on top of him, centering herself over him, grasping his cock with one hand, rolling the condom on and thrusting him into her pussy. He slid inside, pushing past the slick, tight entrance to thrust up into her, pulling her down as far as he could, burying himself balls-deep inside her tight warmth.

“Oh, my God,” he moaned, his cock straining for sweet release, his head swimming with the quickness of being inside her. He’d dreamed of this moment since he’d first laid eyes on her. He lunged into her, burying his face in her fragrant hair, working his hands over her naked breasts, pushing her bra cups down to make them jut out farther until she moaned against his mouth, wetness flooding her channel.