Halloween is upon us, a spooky time to celebrate everything dark and wicked.  When one thinks of things that go bump in the night, vampires, ghosts and goblins come to mind.  But this year, I got the privilege of writing a zombie story for a Halloween release.  I realize that zombies are not romantic or sexy, so I decided to use them as the background to the love story.

Civilization is pretty much a thing of the past in A Wanted Man, and humanity is a concept that can get you killed.  With that in mind, that only the strongest survive, the dynamics in writing such a couple in this environment have to shift a little because strong and weak aren’t necessarily definitive properties anymore.  Although most would say Atticus is the alpha and Kit is the beta, both men have to be strong, both men have their weaknesses, and both men have to learn to give and take.

Drama creates tension and a lot of time heroes have outside trials and tribulations in the form of an antagonist. But when the world itself is the antagonist then this gives a clear path for the two heroes to take.  Suddenly, there are scenarios for the author to explore further. The two men have to work together.  They learn to trust each other, grudgingly.  They learn to fight side by side.  They learn to become partners.

But the road to true love is never easy, especially in a disease-torn world.  The heroes, Atticus and Kit, are trying to find utopia.  Between them and their destination are crazy survivalists, lawless bands of roaming mercenaries, and, of course…the zombies.  With so many different bad guys pulling and prodding the two men, the love story had to balance delicately.  I didn’t want to create insta-love, so trust had to be the first hurdle to overcome.  Both men struggle with issues of trust in different forms.  I had to put myself in their shoes and think, “How would I handle this situation?  Would I jump in with both feet, or would I be hesitant?”

And speaking of putting yourself into your character’s mind-set, the dialogue has to be believable from a man’s point of view.  I tend to write more crudely when I’m writing from a male’s POV.  With men, romance can be as simple and uncomplicated as making sure the beans are the right temperature.  But in a world full of the Z-disease, how can one write romance?  It’s really about the heroes protecting each other’s back in a fight—standing side by side.  They must overcome a marriage minded woman living in a survivalist camp, get past the lawless bands of roamers dominating the roads, even mutated wolves wanting a snack.  And when all hope is lost, loyalty creates an unbreakable love. Trust, loyalty, and passion—It’s the staple of what I put into all my romances.
++++++++++++++++++++++++++++++++++++++++++++++++++++++ 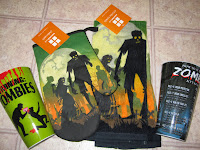