AE Lawless - A Collar for Christmas 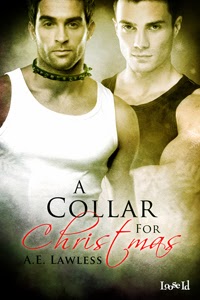 Thanks so much to AE Lawless for taking time to visit with me!

2) Do you read the same genre that you write? Why or why not?

3) What inspired you to write Liam, an actor suffering from panic attacks?

All of my stories are planned in what’s probably reverse order from what most authors plan their stories. I start with what type of sex or kinks I want to write, then I create characters whose deepest desires and emotional needs are met by those kinks, and then I plot situations that would bring those two characters together. With A Collar For Christmas, I really wanted to write some non-sexual kink. So from there it was a matter of creating a character who would participate in kink without there being a sexual component, and the key to that character was always going to be why the kink was necessary outside the sex. Thus Liam, our damaged, anxiety riddled actor was born.
4) Give us an insight into your main characters.  Tell us what draws these two men together?
Aaron I think is the easiest. He’s a born nurturer, a definite care-taker. He’s drawn to Liam because of his neediness and inability to control his panic attacks. He wants to be the guy to fix it and he’s willing to do just about anything to make that happen. With Liam, he’s so used to being the outsider, loved but not really understood and completely accepted for who he is, everyone looking for the quick fix to his problems, that how could he help falling for the first guy that really seems to see everything he is and still accept him anyway?

5)  Tell us in brief about your personal road to publication.

I started out publishing short stories for a porn website that’s no longer in operation, first on a freelance and then on contracted basis. Then one day I got the bright idea to try and expand one of those short ideas into something full length. That first attempt was an utter failure and will hopefully never see the light of day, but shopping it around taught me a lot about the submissions process. Those lessons eventually coalesced into an effort that was worthy of being published and my first novel, A Perfect Solution, was published through Loose Id in 2013. I don’t plan to do any looking back now.

6) Have you ever based a character on someone you know? If so, did you tell them? If not, is there someone in your life you’d like to base a character on?

No, never based a character on someone I know. I feel like if I ever wrote a story with a kid in it, it would be pretty hard for me to keep from making them pretty similar to my own child, just because I think my kid’s awesome, and I don’t really know enough about kids to make one feel realistic without making him say and do the things that mine does.

7) Do you have any writing rituals that you do when you sit down to create? (eg: favorite drink, music?)

Coffee or tea is a must. I have several playlists for writing and often create specialized lists for certain stories or scenes. The biggest thing though is planning. I cannot sit down to write if I don’t know exactly what I’m trying to write and where I’m going with it before I even try to work. I like to have all my notes sitting next to me so that I can flip through them as I write. I’ve often found that being outside if the weather permits generates higher word counts. Also, if I’m having trouble with a particular scene, I like to take a drive to clear my head, usually with the top off the Jeep.

8)  What’s coming next for you as an author?

A few things. I’ve got sequels planned for both of the novels I have out now and hope to release both during the coming year. I’m also working on a story about second chances, taking risks and not judging a book (or a sexy man) by its cover.

9) Were there any specific part of A Collar for Christmas that you absolutely loved writing as well as not enjoyed writing?

My favorite scenes to write were the ones with Liam and his family. I loved playing with their dynamics. There wasn’t really anything I didn’t enjoy writing, but after the first draft was finished my editor suggested we change the tense from present to past so I had to edit the entire manuscript for that. That wasn’t fun, but it was the right call, so *shrugs*

For actor Liam, anxiety and panic attacks are old friends, but they only get worse the more famous he gets. Nothing has ever worked to help him control the anxiety until his costar, Aaron, introduces him to bondage. Too bad Liam develops feelings for Aaron and ruins the only solution he's ever found for his neuroses.

What starts out as a way to control Liam's anxiety becomes so much more. At least for Liam. So, tired of pretending he doesn't want Aaron in his life for good, Liam decides to give him the perfect Christmas gift. The kind that will show Aaron exactly what Liam wants from their relationship: the collar he's been dreaming of Aaron putting on him for months.

About The Author A.E. Lawless

A.E. lives in south Louisiana where everything is bigger, covered in camo and made with more butter. She sweats her way through the summers because she loves the people, the food and the culture found only there.

She couldn't manage any writing at all without copious amounts of coffee and her writing partner: her cat Bacon