A Steamy Romance from Sonia Stanizzo! 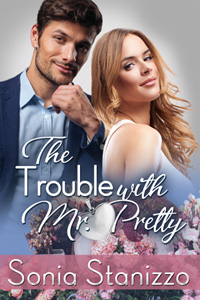 Hello Sonia!  Thank you so much for visiting Written Butterfly with me today!  It’s such a pleasure to chat with you.  So tell me…

I think like a lot of writers, we dream up story ideas or a snippet of an idea and we turn it into a story.  That’s exactly what happened with The Trouble with Mr Pretty.  I had a dream of a woman sitting and watching New Year’s Eve fireworks and feeling a deep gut wrenching pain.  I woke up and immediately wrote down the scene and then continued on with the story.  The dream started off as a prologue but I thought it was too depressing so I threaded it through another scene instead.

I do like to light a white candle.  I don’t know why it needs to be white but I find it soothing.  Especially if I’m stuck on something that’s when I’m most likely to light it.

I’m not a big planner though I do like to do a brief character description so I can get to know them better.  It helps me to know how they might react in a certain scene.  But sometimes I think they’ll do one thing and they turn around and do something completely different.

I’ve written a story about a secondary character Ava, from The Trouble with Mr Pretty.  She’s been a lot of fun to write.  I’ve pulled her from her meticulous life into a messy one.  I’m still tweaking and editing it.  I’m hoping to get it finished soon.

The Trouble with Mr. Pretty by Sonia Stanizzo

When the man you want to avoid is the one you really want, trouble is sure to follow.

Gift shop owner Lauren Moore’s motto is ‘never trust a pretty face.’ Following a disastrous affair with a handsome celebrity, she’s vowed to never fall for anyone like him again.

But when Australia’s sexiest ex-football player, Jack Henderson, barges into her shop late one night, displaying all the charismatic characteristics she wants to avoid, Lauren is unwillingly drawn to his seductive good looks and bad-boy smile.

When Lauren is forced to accept a job offer from Jack to pay her blackmailing sister, Jack shows her that he is more than just a pretty face. But as the two grow closer, Lauren remains resistant to Jack’s attempts to break down the barriers around her heart.

Can Lauren let go of the past and trust in love again?

EXCERPT
“I need something to get myself out of trouble,” His deep voice sounded as smooth as whiskey.
Heat sizzled and stirred around her, making the room feel like a sauna. Was the air conditioning off already? The need to get him out of the shop fast was crucial; otherwise, she feared she might melt into a steamy puddle at his feet.
“Does ‘getting you out of trouble’ have a price tag?” Lauren asked.
“After the mess I’m in, the sky’s the limit.” He grinned.
“A desperate man with lots to spend—you’re my favorite customer,” she joked, keeping it light while her insides turned to a quivering mush. “How much trouble are you in?”
One large shoulder shrugged as he dipped his head and dug his hands into the pockets of his jeans. “Enough for me to pound on your door after closing time.”
The devilish smile showed he knew how to get himself out of all sorts of trouble. Why did men think women could be appeased by a charming smile and expensive gifts? A stab of shame pierced Lauren’s thoughts as she remembered a time when she could be won over by sparkly trinkets and a dazzling smile. She’d learned the hard way that shiny things soon tarnished.
“We have beautiful lockets. What’s your wife’s style?”
“I’m not married.”
“Your girlfriend?”
“It’s for my mother,” he clarified.
“Oh.” She hadn’t seen that coming. A get-out-of-trouble gift was usually for a lover.
With stiff fingers, she touched the locket around her neck. It wasn’t one of the pretty gem-encrusted ones she sold, but to her it was much more valuable. Lauren had found the cheap silver locket years ago at a small seaside market she’d been aimlessly walking through. A precious yet painful reminder lay locked inside. A big reminder of why she kept away from men who looked too good to be true.
“These vases are lovely if you think your mother would like them.”
He ambled over to the cabinet, closing the distance between them. The smell of sunshine, sea breeze, and man surrounded her and sent her senses into overdrive. She stepped away, only for her back to press against the wall, giving her no more room to move.
As he looked inside the cabinet, oblivious to the turmoil he was causing her, Lauren examined his profile. The start of an afternoon shadow covered a square jawline. His long, narrow nose had a small bump on the bridge, the only flaw on his chiseled face. He bit his lower lip as he studied the vases, and for a moment, she wondered how they would taste. Where were these outrageous thoughts coming from?
Lauren desperately needed to put more space between them. Standing so close was making it impossible to think, but to move would involve brushing past him. Touching him wasn’t going to help with her jumbled thoughts and sensations.
She excused herself. He stepped back, giving her room to pass, but not enough to avoid contact, and her bare arm brushed the length of his strong, firm one. Another blast of heat shot from him and into her. Blinking up at him, their gazes locked, and she searched those piercing green orbs to see if he’d felt it too. His emerald eyes held hers.
A shrill tooting of horns outside broke the spell, and she glanced out the window. A bunch of excited New Year’s Eve revelers, with colorful hats and party horns, crowded the footpath in front of the shop.
“They’ve started early,” she said on a shaky breath, using the noisy distraction to move away from him. She scurried behind the counter, putting a safety barrier between them.
He flicked a glance over his shoulder at the partygoers. “It will be a great night for it.”
By his casual stance she would have believed him unaffected by the burning moment they’d just shared, but heat still smoldered in his eyes. Then, in a blink of an eye, it was gone. Could she have imagined it? It had been so long since anyone had come even close to looking at her that way that she probably read the signs wrong.
Needing to get back to the reason he was there, and not be distracted by that liquid green heat, she cleared her throat. “Do you see anything you like?” She relaxed a little because her voice sounded professional and not like the trembling mess simmering on the inside.
The liquid heat was back in his eyes and they raked over her in a way that said she was what he liked. A sharp breath caught in her lungs and her heart began to race. Surely she didn’t get that signal wrong? 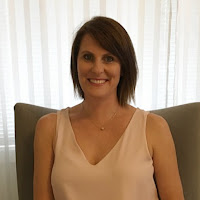 Sonia Stanizzo is a romance writer who lives in the beautiful coastal city of Wollongong Australia. When Sonia’s not working with her husband in their motor mechanic business she can be found chauffeuring around her three kids, chasing after a hyperactive Beagle, taking pole dancing lessons (purely for the fun and exercise) and spending any free time reading and writing.