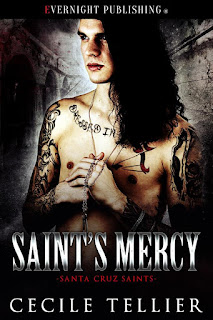 Hello Cecile!  Thank you so much for visiting Written Butterfly with me today!  It’s such a pleasure to chat with you.  So tell me…

A) It’s actually funny that you should ask that, I have narcolepsy and I do quite literally dream all of my characters and stories.  Occasionally I’ll have a series of dreams about one story and the characters will evolve that way.  Most of the time I dream the entire story in one package.  It’s like watching a movie in my own head.

A) It is the first book in my MC series.  I wanted to write something that was reflective of what happens when misfit children become misfit adults and find a family of their own.  Something like the Boxcar Children (by Gertrude Chandler Warner) if they’d grown up to start a motorcycle club.

A) I’m not sure if this is fun or interesting but Saint’s Mercy is my first contemporary book. I discovered that writing “real life” is actually harder than creating my own worlds.

A) Other than real life rules (combat, laws, gravity) I am lucky to have had a lot of exposure to motorcycle clubs.  I’ve grown up around that culture and I always loved the family feeling.

Lucien Rossi grew up on the streets of Santa Cruz, California.  He had little to nothing to call his own, and ran with a rough crowd.  He only had two things he cherished in his life, the most important was Luz Ramirez. When he met her he knew she was someone he would die to protect.  Years later and now a president of the Saint’s Mercy Motorcycle Club, he’s about to find out that Luz is still a grenade to his best intentions.

When her mother passed away, Luz Ramirez was given a second chance at a happy life with her foster mother.  What she didn’t count on was that she would meet the dangerous but magnetic Lucien.  Even after forcing herself to move away rather than become like her mother, it only takes a few days back for this bail bondswoman to recognize who her heart belongs to.

Excerpt:
Leaning forward he pressed his forehead against hers with a smile he couldn’t hold back. "As to the state of my purity, don't ask questions you don't want the answers to. You live in a world of black and white where the guilty are punished and the innocent live happily-ever-after, but my world is and has always been full of shades of gray."
Luz's eyes darkened to that near black as she looked into his. "I've not yet found a happily-ever-after, and I'm far from innocent. I don't need your charity, your pity, or your protection."
Lucien saw the look of hurt flash over her face before she once again hid behind that blank mask she so often slipped on when she dealt with the outside world. He'd be damned if she'd use it on him, though. Before he could stop and think rationally about his next move he was kneeling on the floor in front of her. "I've never pitied you, and your acquaintance to me has been anything but charitable for you. My protection you will get, whether you like it or not, Luzzy. Even when I'm not there, I'll be damned if someone gets anywhere near you to hurt you."
Luz opened her mouth, and before she could get a word out, Lucien’s impulse and need collided, resulting with his hands speared into her curls, and his mouth eating hungrily at hers. Her muffled shriek of surprise was quickly turned into a moan against his tongue as he took no time in plunging it between her lips when they opened. He knew this was the worst possible thing he could have done, as they'd always been like gas and fire when angry, but he couldn't deny himself.


When her head snapped back he was certain she was going to slap him, or worse. Instead, she gasped for air briefly, then grabbed his ears and pulled him back in for another meeting of lips, teeth, and tongue. He'd never known Luz this way, not for lack of wishing, and he was quickly regretting that he'd not tried this sooner. The sound of persistent banging was the only thing that had him breaking the kiss and backing away from her.
Posted by Beth D. Carter at 9:49 AM