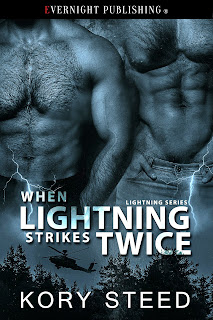 Hello Kory!  Thank you so much for visiting Written Butterfly with me today!  It’s such a pleasure to chat with you.  So tell me…

I could never have imagined how much Jason and Aaron have changed from their introduction in From Lightning to Love, however, I’ve always loved the dynamics between characters who occupy different ends of the personality spectrum and how they cay play off each others strengths and weaknesses. On first appearances, Jason appears reserved, patient, and sensitive, but when someone he cares about is threatened he can become a force to be reckoned with. He’s also a thinker who weighs his options before he acts unless he’s thrown into a life and death situation.

At the other end is Aaron who appears outgoing, boisterous, and impulsive, but on the inside is a sensitive soul who is covering up for his insecurities. Because he is a decade younger than Jason, he hasn’t gained as many life experiences.

As the series has progressed, Jason has been pulled out of his shell by Aaron, and Aaron has matured greatly to the point where they are beginning to stand on equal footing. As a couple, they have become a force of nature who have a clear vision for the future and the wherewithal to get there.

When Lightning Strikes Twice is the third book in my Lightning Series. It is the story of a gay, male couple who were forced together by chance, fell deeply in love, overcome obstacles to remain together, and have chosen to dedicate their lives towards the betterment of the gay community. The two MC’s are Jason Ackerman, a former army medic and Aaron Jaeger, a former professional football quarterback, and their story is about how the strength of the bonds of love can overcome any adversity.

In reaching book three, Jason and Aaron have surrounded themselves with a support system of caring individuals who believe in their mission. Adding their unique personalities to the storyline has provided me with a tremendous opportunity to incorporate the wonderful dynamics each of them brings.

Yes. Nearly all of the recipes and dishes served in the all of the books come from my own culinary repertoire. I must admit, I have never cooked a crown roast.

When I began, I had two goals. First, I wanted to tell a story about how diversity enhances our world and how we all draw on each others strengths while maintaining our individuality. Second, and this is not an original idea, but I wanted to show how we are so much more alike than we are different, and I continue to believe this.

I think I have some of the worst writing habits. When I write, it’s all consuming. I’ll often get a hint that something’s fermenting in my mind, but it can be weeks before it reveals itself. I’ve started writing one day, continued through the night, and worked well into the following day until I’ve mentally collapsed. After sleeping for twelve to fourteen hours, I’ll begin all over again. After several days of repeating this pattern I slow down and can then work at an even pace for several hours each day until the story is complete.

They often develop on the fly, but there are times when a character comes to mind while I’m writing a scene who I believe will be useful later on. I’ll write down a few notes on them and then go back to what I was working on. At some point in writing a story I’ll often suddenly stop and go to one of the baby names web sites and select a list of twenty or thirty male and female names as possible characters to use later on in the story.

I’d say real life makes up about half of what I write. I love the author’s adage, “Careful how you treat me or you might just wind up in one of my novels.” Many of my characters personalities come from people I know or have known, but who have passed on. I often shroud them with different body types, different professions, or as the opposite sex, or, I’ll combine particular personality traits to make a completely unique character.

Nearly all of the medical conditions I include are ones I have professional experience with.

I have a new, spin-off series from Lightning called Family Men. It will be released soon (I’m hoping for Valentine’s Day). There is crossover of characters from Lightning, but it is a different kind of M/M Romance story with a completely different storyline. I believe it’s my best work to date. The first book’s manuscript is currently with my publisher’s copy editor. I’ve also just submitted my first Romance on the Go novella to my publisher, and I’m currently working on a second. 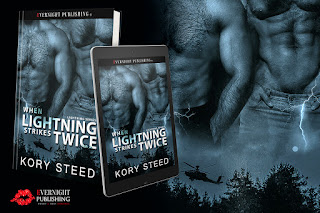 The Lightning Series, 3
Discharged from intensive care after an invasion and attempt on their lives, Jason and Aaron return to their home, but it has become a militarized, cocooned compound with a new security force and support staff hired to ensure that their dream for Nathan’s Promise, an LGBTQ physical rehab center, becomes a reality. Friends both old and new join them, and in the ensuing days and weeks, Nathan’s Promise begins to take shape. Jason experiences a bittersweet reunion with his beloved barn animals, and romance between two of their new friends burns to a fevered pitch, an ex-Marine comes out to his father, and a mass-casualty event ensues.Jason, Aaron, and the remaining survivors struggle to treat the wounded before time runs out, but a freezing rainstorm has grounded their rescue by helicopter. Who will survive until morning? Has fate forced them to concede that their dream for the LGBTQ community has been shattered? And will the prediction of a new nemesis make their lives a hell on earth?
Be Warned: m/m sex, rimming, sex toys 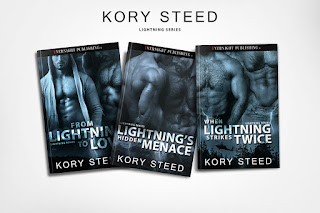