Author Arlie Adams Has Stopped by for a Visit! 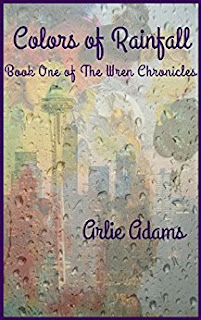 Hello Arlie!  Thank you so much for visiting Written Butterfly with me today!  It’s such a pleasure to chat with you.  So tell me…

The two main characters in my book are Briallen Whitcombe and Zachary Wren.
Briallen is a smash-up of two good friends - an eccentric artist and an outspoken free-spirit.

My hero is based on a conglomeration of men that I’ve known and dated (I won’t say more than that except not one was a millionaire at the time we were together!) Zachary wades through decisions by compartmentalizing his life, which I think is typical.

The emotional life of men has always intrigued me. If left to themselves, I don’t believe there would be a great deal of hand-wringing or introspection. But in order to get what they want (heh), they have to engage with the touchy-feelies, at least to some extent. As such, I hold that they are more complicated than women, although not one man of mt acquaintance would agree.

“Colors of Rainfall” is Book One in The Wren Chronicles. There is a large cast of characters who continue through upcoming books and who give their point of view in various chapters.

Most of the book is set in Seattle, WA. I lived there for five and a half years and loved everything about the city except the weather. The other location is a vacation spot on the Gulf of Mexico on the Alabama-Florida state line. I’ve spent many great holidays on the Gulf and incorporated my memories into those chapters.

I once attended a book-signing by the late mystery author Robert B. Parker. He said that he wrote every day, no matter what, even if it was just a few pages that he might later discard. I find that I keep in touch with my creative side by following this practice.

The major characters are set. The secondary and cameo-appearance players pop in unexpectedly with very loud voices.

Every location is one in which I’ve lived or have visited. I try to include local landmarks, restaurants, and neighborhoods to add authenticity.

The continuation of The Wren Chronicles and The Orchid Collection novellas. I just began to cogitate on a book set in the 1970’s. We’ll see…

A smart, quirky artist meets a sexy but grim tycoon in a local bar. Fireworks explode during a one night stand.

Briallen Whitcombe is an artist thrown into the spotlight with a donation of a work to MoMA in NYC. The world clamors for her art, but she looks for an escape.
Zachary Wren heads a green initiatives company. A lonely boy evolved into a remote, pitiless businessman who lives to work.

Briallen and Zachary have one thing in common. A need to connect anonymously with hook-ups. They meet in a bar and explosive passion erupts. It doesn't ease the craving; it drives them to locate each other again. Can passion lead to love?

For Mature Readers over 18.

Writing romance stories is the latest chapter in my career history. I have worked in Manhattan's garment district, as a producer of talk radio programming at a New York City radio station, and as a marketing rep for a major airline. A return to culinary school and a series of restaurant jobs followed. Over the years I have called New York City, Denver, Seattle, Miami and Orlando my home.

In December 15, 2014, a new series of sexy romance novels were released in the Kindle Store at Amazon. Each book is part of "The Orchid Collection" and takes place in a property owned by the fictional Orchid Hotels International. Eight books in the series have been released, with more to follow. The books feature handsome heroes and memorable heroines.

I have also written a paranormal series, "The Other-Worldly". They are the stories of a Warlock and a Witch who meet in challenging circumstances. Together they are destined to rule the races of The Other Worldly, if only they can stop arguing long enough to do it!

My backlist includes two novellas published in September, 2013. "Sandpiper's Song" tells the story of a late night radio personality and her tumble (literally) into romance. "Lizzie's Beach House" is a tribute to my vacations in Westhampton, NY in my early twenties. Both novellas are available for download.