Secrets of the Pharmacy...

Ever wonder about why it takes so long to process your prescriptions? Thought I'd share 10 insider tips about what it’s like working in a pharmacy. 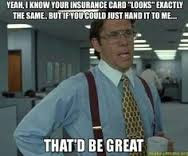 1) Medical insurance and prescription insurance are two separate entities.  A medical insurance company will hire another entity to process their prescriptions, for instance, Blue Cross Blue Shield usually will have either a company called Express Scripts or Paid, and they are not interchangeable.  So telling the tech “I have the ID number” means absolutely nothing.

2) There is not a database of every prescription insurance in the United States.  No, the tech just can’t put in your social security number and magically pull up what insurance you have.

3) Medicaid is not transferable between state lines.  For instance, if you have California Medicaid and travel to Nevada, I can’t bill the state of California for your prescriptions.  You have to pay cash, and more than likely, you will not be compensated from the state of California.  Same with an HMO insurance, like Kaiser.  Kaiser is not in Nevada, therefore we have no contract with Kaiser and cannot bill them for your prescriptions.

4) Medicare is not part of Obamacare.  I can’t tell you how many seniors, who fall in the coverage gap, blame Obama.  No, he had nothing to do with you picking crappy Part D coverage.  And for those who don’t know what the coverage gap is, it’s when the patient meets the limit of coverage then has to pay a deductible (for lack of a better term).  Once that gap limit is reached, the insurance will resume.  Sometimes that gap is a couple thousand dollars.  There are Part D plans that don’t have gap coverage, so make sure you ask the right questions of the agent you’re buying coverage from.

5) I work for a very large pharmacy chain, which has about 3000 stores nationwide.  If a prescription is filled for you in Kentucky, no it’s not going to be ready in Nevada.  We do not fill every single prescription from every single pharmacy.  We’ll be happy to transfer them, but we don’t have ESP and know that you’re on vacation.

6) It takes time to rebill the seven discount cards you’ve brought in.

7) Pharmacists are held accountable for the narcotic and controlled substance prescriptions that doctor’s write (at least in Nevada they are).  There is a database that a patient is put into every time a CII narcotic is filled, so we can look online and see every doctor and pharmacy that you’ve been to.  Target drugs, such as oxycodone, is scrutinized heavily.  The reason it may take a few hours to fill #120 oxycodone and #60 morphine ER is because of paperwork.  Many pharmacies give the patient a  24 hour turn-around with one day grace period from the last time filled.  So if I tell you it’ll take two hours for your two narcotics and only 20 minutes for someone else’s antibiotic, it’s not because I don’t like you or are being prejudice.  Believe me, we don’t like it either.

8) Just because a doctor gives you a coupon doesn't mean it's going to work.  If you have any type of governmental job, or have insurance subsidized by the government, you can't use a coupon. There are many restrictions on coupons, for instance, the current Epi-pen coupon isn't good on patients 18 or younger.  It's all in the fine print.

9) Just because a medication is prescription doesn’t mean your insurance has to cover it.  Many new drugs are so expensive you’re copay is going to be astronomical.  There are usually tier levels to insurances, for example, tier one drugs costs $10.  Tier two can cost #20.  Each drug is classified, per your insurance, into a tier level. Sometimes they don’t cover a drug at all (called non-formulary). And no, you’re doctor has no idea what your insurance is going to cover.  And no, they don’t care.

I realize there are crappy pharmacies out there with crappy employees, but the majority of the people I’ve met in my 20 plus years in the healthcare field are just normal folks trying to help you out.  At least, my co-workers and I am.  If we don’t smile while we’re helping you, we’re not trying to be unfriendly.  It’s usually because we’ve just been cussed out because of one thing or another, or it’s so busy all I can do is concentrate and focus on helping you to the best of my ability.  I know you feel bad, or your baby is feeling bad, and I’ll get your medicine to you as fast as possible.  But on busy days there might be twenty people in front of you that feel the exact same way.  And just because there might not be anyone in the waiting room that doesn’t mean we’re not busy.  We’re constantly having doctors fax and email us prescriptions all day.  Oh, and just a reminder, when a doctor emails or faxes a prescription to us, it doesn’t come directly to us.  It goes to a third party who verifies that it came from a doctor’s office before we get it.  Otherwise, it’s against the law for you to fax us your prescription.  Thanks for reading and I hope this blog has shed a little light on what it’s like to work on the other side of a pharmacy counter.