Q & A with Katerina Ross! 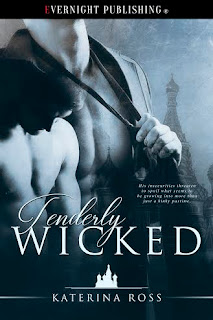 Hello Katerina!  Thank you so much for visiting Written Butterfly with me today!  It’s such a pleasure to chat with you about your book Tenderly Wicked.  So tell me…

I tried to give as many details on living in Moscow is possible, so readers could wander the Moscow streets with my characters and see how fascinating my home city is.

At the moment, I’m writing several M/M and M/M/F stories simultaneously. All of them are set in Russia. 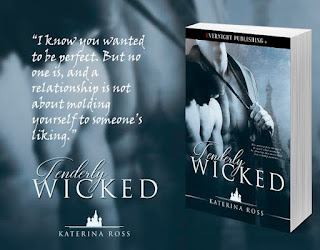 Vadim stood in the middle of the room, his gaze wandering in the direction of a double bed, and Max slowly circled him, eyeing his guest appreciatively in what he hoped to be a slightly unnerving manner—hands clasped easily behind his back, bare feet stepping soundlessly across a green carpet with thick, dense woolen pile, the only decoration in the studio, clearly bought by the owners in an attempt to make the rental apartment seem more homely. It felt soft and pleasantly ticklish.
“Before we begin, tell me your safeword,” Max said at last, satisfied with his survey.
Vadim winced, as if annoyed. “Is it really necessary?”
Well that was a surprise. Max had always thought a safeword, slovo in Russian, was essential to every BDSM community. As far as he could tell from weeks of night chatting, there was no exception to this formality in . Why would Vadim be reluctant to use one?
Max stopped directly in front of him, in his personal space, and let out a slow smile, not exactly threatening but still dangerous. At least he thought so. He’d been practicing it in the mirror for a long, long time. “I’m going to establish some ground rules here,” he said in a low voice. “When I give you an order, you obey me. Instantly. If you don’t, I’ll have to assume you misunderstand your position and think you have some control left. Then I’ll have to correct your flawed reasoning in the most visceral way possible. Is it clear enough?”
“Yes,” Vadim whispered after a small pause.
“Good.” Max unclasped his hands and traced down Vadim’s left cheek and then his throat with a finger. Vadim shivered under the touch. “Show me you can be obedient then. Give me your safeword.”
“Red.” Vadim’s voice hitched when Max brought his thumb across the young man’s smoothly-shaved chin and touched his plush bottom lip.
“That will do,” Max confirmed. A reasonable choice for playing with a stranger, an international safeword code. It was like traffic lights, easy to remember. Red for stop, yellow for a breather. “Ready to begin?”
“I thought we had already,” Vadim murmured cheekily, eyes now closed halfway, shaded by long eyelashes, and lips wantonly parted as Max kept stroking his chin. But he gasped and his eyes fluttered open when Max squeezed it sharply, drawing him in for a quick harsh kiss that vaguely tasted of coffee and cigarettes and then let him go. “Now we have.”

About the Author
Katerina Ross lives in and works as a journalist. There are no M/M publishers in her country at all, and thus she wrote a hot and kinky M/M romance in English. It’s set in , so you’ll get to know the city she lives in.