Germs of War by Ketan Desai! 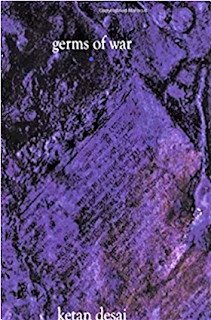 Hello Ketan!  Thank you so much for visiting Written Butterfly with me today!  It’s such a pleasure to chat with you.  So tell me…


Some of the characters are based on people I know, others are dreamed up.  As the story unfolded, I found slots for them and how they interacted with each other.


It did not start off as a series but ended up as one.  In Germs of War, the rogue CIA agents are first introduced, though the main character is a female student.  In the next book, the ex-agents get involved in China and its attempt to create a super-human race using cloning technology.


In many ways, Germs of War predicted 9/11.  The book was written in 1998 when no one cared about Afghanistan.  So the thought of terrorists based there mounting an attack on US was quite unfathomable to many.  Yet that is what the book described, the only difference is that in the book, biological weapons were used.


Strongest asset is knowledge of science since I am a scientist and a physician.  It is very easy therefore to write about Sci-Fi.  Weakest factor is writing about romance.


I’m original.  No point becoming the Walmart of writers.


Mix of both.  I start with a few basic characters but then introduce others as needed.


I started off writing Germ of War as a stand-alone book, but with science becoming more out of control by the day, decided to make it a series by using science fiction to highlight the dangers ahead.


The next book deals with China’s attempts to create a super-human race by creating designer babies.  But, the Chinese find out what the poet Robert Burns meant when he wrote “the best laid plans of mice and men gang aft a-gley (often go wrong)”


What if ISIS had biological weapons? This nightmare scenario was published in Germs of War first in 1999, which predicted 9/11. A fast-paced amalgamation of science, international intrigue with rogue CIA agents battling terrorists, and politics. And a lonely student who can thwart it all. Will she be able to?

Ketan Desai is a physician, entrepreneur, and a scientist. In Germs of War, he predicted 9/11 and the rise of Al Queda. He also writes for Seekingalpha.com and Talkmarkets.com