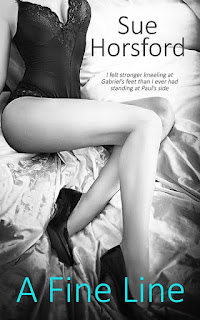 Hello Sue!  Thank you so much for visiting Written Butterfly with me today!  It’s such a pleasure to chat with you.  So tell me…


I originally wanted Gabriel to be a bit of a cad, to be emotionally unavailable and to break Faye’s heart. I didn’t mean for it to turn into a love story. But when I started writing, I felt it would be more interesting if he started out that way and she changed him as much as he changed her. I wanted Faye to represent every woman. So, she’s not stunningly beautiful or incredibly talented but she is happy in her own skin. I didn’t want her to be the sort of woman who would have her head easily turned by a handsome stranger, I wanted her to be a no-nonsense down to earth woman and I loved the idea that this man could come into her life and turn all her ideas about herself upside down. I gave Faye a job working with women going through domestic abuse because I was fascinated by the dichotomy of a woman who works every day to empower women, suddenly being faced with this desire to submit to a man.


The most common question I get asked about A Fine Line is: Am I writing about my own sex life?


I think my strongest asset is that I have a good ear for dialogue. I love that moment when my characters start speaking and all I have to do is listen. Though they don’t always say what I expected them to say! My weakest point is that I’m easily distracted. I tend to write my first draft longhand because once I’m at my computer, the internet is such a tempting distraction!


I think in A Fine Line, I was trying to be more original. I’ve since studied the genre more thoroughly and I think my second book is maybe closer to what readers often want, my female character is less down to earth, more beautiful and successful. My third book which is a fantasy is very different and quite experimental. It remains to be seen whether readers will like it!


I have a rough idea of who my characters are but I do find them changing and developing as I write and I find out more about them.


No one would understand that my submission empowered me, that I felt stronger kneeling at Gabriel’s feet than I ever had standing at Paul’s side.


Faye Austin seems to have it all – a fulfilling career, a successful husband, a beautiful home. But appearances can be deceptive and sometimes Faye can’t help thinking she’s living the wrong life. A lifetime of being compared to her beautiful younger sister, Ginny, has left her feeling second best, and a chance discovery while looking at her husband’s laptop has led her to realize that her marriage is not all it seems.


Then she meets the handsome Gabriel Scott, a man who likes to play sexual games of power and control, and suddenly everything makes sense. Gabriel’s natural dominance is so compelling that Faye feels her own submissiveness awakening in response, a reaction that both horrifies and excites her. She works with victims of domestic abuse and is adamant that no man will ever tell her what to do. But there’s something about Gabriel that draws her in and gives her a glimpse of who she really wants to be.

Gabriel came to stand before me. “Relax,” he said softly. “I’ll take good care of you.”


Slowly, he unbuttoned my dress and slipped it off my shoulders, his dark, hypnotizing eyes never leaving mine, until I stood before him in nothing but my underwear and shoes.


He gave a slow, sexy smile. “Very nice.” He ran his thumbs over my breasts through the lace of my bra and pinched my nipples between his thumb and forefinger. “This is beautiful, but it needs to come off.”


He reached behind me, and, after unhooking the clasp, he slipped my bra down my shoulders and let it drop to the floor, then he unknotted his tie and eased it out from under his collar. He held it between his hands as I watched, mesmerized.


“Turn around and put your hands together behind your back,” he ordered.


I turned and clasped my fingers together, then he wrapped his tie several times around my wrists and drew it tight. He threaded one hand in my hair and pulled my head sideways so my neck was exposed to him, and I closed my eyes in ecstasy as he nipped at my earlobe.


Still holding my hair, he turned me back to face him. “Now that is a magnificent sight,” he said, “my beautiful submissive bound and obedient for her Master.”


His words sent a thrill coursing through my body.


“I’m going to do whatever I please to you tonight,” he said, “but I want you to think of a word to use if it gets too much for you. Any word will do.” He paused, and his eyes bored into mine. “Except the word no. You will never say no to your Master.”


I cast about me for a word I would remember, and my gaze fell on the dress now pooled at my feet. “Velvet,” I said.


“Velvet, then. I promise you, Faye, the next time you say velvet, I’ll stop whatever I’m doing. Do you trust me, sweetheart?”


“Good. Now, I want you to keep very still for me. Don’t respond until I tell you to.”


He slipped off his jacket, taking something from his pocket and unbuttoned his shirt, exposing a broad, tan chest. A T-shape of dark hair ran from between his pectorals to vanish teasingly beneath his waistband, drawing my gaze downward over his lean stomach and well-defined abs. Fully dressed, Gabriel had the air of a sophisticated gentleman. Half-naked, the untamed man beneath was revealed. He stepped in close to me until we were touching, and my breath caught at the sensation of warm skin on skin. Then he opened his hand and showed me what was inside—two tiny metal clamps, tipped with rubber and joined with a silver chain. 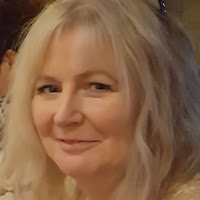 I am a qualified hypnotherapist and Reiki practitioner living in the North of England with my husband and soul mate. Over the years I must have started and abandoned over fifty novels before I decided to try my hand at writing erotica. Finally, I had a finished novel and a new hobby all in one. I never realized writing could be so much fun!