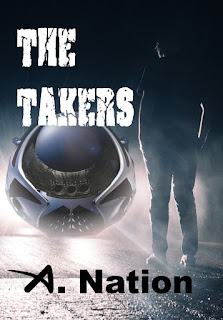 Hello!  Thank you so much for visiting Written Butterfly with me today!  It’s such a pleasure to chat with you.  So tell me…
Q) How did you dream up the dynamics of your characters?
- I can see them how they look in my mind for the scene. After watching a lifetime of movies and television, they are easy to picture. I love mysteries and sci-fi, so I just combined the two in my genre.

Q) Is this book part of a series?  If so, can you tell us about it?
- My latest book is The Takers. It is the 8th book in my sci-fi series and the fourth book
in the scifi detective series. Every city, like today, has a problem with the homeless. Unfortunately, in my story, they are taken advantage of by greedy people to. work in the mines on Mars. Even Whistleblowers in Washington D.C. are turning up missing. When one man returns dead in a cargo ship, Detective Blackhawk is placed on the case.

Q) Can you give a fun or interesting fact about your book?
- The detective is a Navajo descendant. He once chased his suspect to Mars and met a young alien who wasn’t supposed to be on the Moon.

Q) Do you try more to be original or to deliver to readers what they want?
- I write for enjoyment and create an interesting story that will keep them interested to the end of the book.

Q) Do you plan all your characters out before you start a story or do they develop as you write?
- Being as this is at the end of the series, my characters are already developed. However, the new ones that add to the story, are described as I write.

Q) Do you want each book to stand on its own, or are you trying to build a body of work with connections between each book?
- Each book stands on its own, but it helps to read them in order. I write Realistic Fiction so some of the younger characters mature, just like in life.

Q) What are your upcoming projects?
- Nanowrimo, of course. This will be my fourth urban fantasy, but I’m going to start with a new character. As soon as that’s done, I’ll continue the next story for my established character.


“How did you find the body?” Alex asked.


Al looked at the security officer and back at Alex.


“We, Joe and I, were unloading the crates closest to the exit when we heard a noise, kind of like a ‘thud.’ I went to the back of the containers and saw a hand on the floor. I called for Joe to help me and we pulled a crate out of the way. The body was laying there between two of the boxes. He was cold as ice. There’s no heat back in here since there aren’t any perishables while shipping back to Earth. This is an auto driven craft with one pilot.”


“He’s down on the tarmac waiting for us to release him,” the STSO said.


“Jaxon, as soon as you record the scene here, go down and talk to the pilot,” Alex said and turned to the security officer. “Okay, show us where he’s at.”


Jaxon carried their I.D. kit as they walked the length of the fuselage, stripped of passenger seats, entertainment monitors, and service carts. This was a cargo ship. Most of the crated cargo lined up five rows by the distance of the floor. They arrived in the tail section near the last row of freight. Alex noted the out-of-place crates left after the crewmen had discovered the body behind the ore containers. The STS Officer pointed Alex toward the body.


Jaxon took some photos with his comphone and sent them to his and Alex’s office email. He pulled out the Finger Recorder and scanned the man’s lifeless hand and fingers.


“Note, a male about thirty, shaggy brown hair, thin, and calluses on his hands,” Jaxon said, examining the body. “Abrasions on his forehead that appeared to have healed some time ago.” 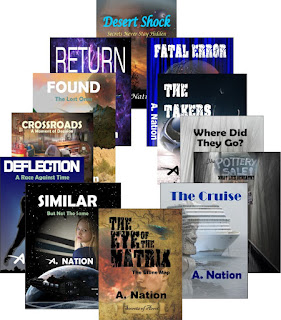 Rest of my books: In order for sci-fi, Similar, Deflection, Crossroads, Found, Return, Desert Shock, Fatal Error, The Takers. A young adult scifi is the Eye of the Matrix. My Urban Fantasy:  Where, The Pottery Sale, and The Cruise.
Posted by Beth D. Carter at 12:30 AM