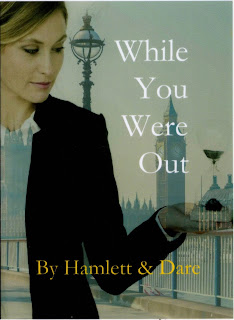 Hello Christina & Jamie!  Thank you both so much for visiting Written Butterfly with me today!  It’s such a pleasure to chat with you.  So tell me…


A) We both have a crush on Robert Downey, Jr. and wondered what it would be like if his charismatic self were thrown into the path of a plucky romantic who suddenly finds herself working for him in his posh London office. Our supporting players in the storyline—including Henny’s kooky relatives—were a delight for us to develop because it’s consistent with the notion that the course of true love never runs smoothly. We’ve also respectively known a lot of kooky personalities we decided would be fun to work into a mystery about the cutthroat art world.

A) It’s a standalone title we’re very pleased with. If we were to do anything more, it would be a prequel involving Henny’s colorful, globe-trotting aunt.

A) Two things actually. The first is that although Jamie and I have been working together since 2012 and both live in Los Angeles County, we have spoken only once on the phone and have never met in person. We worked on this novel in the same way we have worked on our plays; specifically, I write a scene/chapter and send it to her with a list of “reveals” for the next scene/chapter she’ll be writing. In between we do lots of brainstorming on what the characters might do next. Our writing styles are so seamless that not even my husband can tell our writing apart. At no time during WYWO’s development, however, did I reveal how the book would end because I wanted to keep her in the same mindset as our heroine. Talk about driving someone crazy! She didn’t find out the ending until I gave her the last two chapters (which I wrote myself). Secondly, the resolution of the plot is entirely plausible to anyone who wants to refresh their memory on history, geography and art. In other words, it could have happened just the way we described it.

A) For both of us, are strength is in dialogue and snappy pacing. Jamie had never written a play before but was an online screenwriting student of mine who could write absolutely hilarious patter among characters. At the time we “met,” I already had over 150 credits as a playwright and 16 years onstage as an actor and director. She was excited to learn the craft and we have since sold 7 plays that are doing quite well. When she told me that she had always wanted to write a novel, the time seemed auspicious to teach her out to do that, too. We currently have two more novels in the works as well as a mystery series. As for weakness, we’re both wildly impatient.

A) The only time we bow to the pressure of someone else telling us what to do is when one of our play publishers asks us to develop a specific project for their target market. Otherwise, we’re 100 percent original in our mutual love of the written word. We like to write the kind of plots we like to read.

A) We may have a keen idea at the outset on what we want our characters to do with themselves as a story unfolds but we also have the wisdom to listen to them if they tell us they want to do something different. I suspect if we ignored them for any length of time while we were off doing something else, they would just go ahead and finish the book themselves.

A) The mystery series we’re noodling around will have sustainable, recurring characters. Now and again, we may have characters from a standalone book go “visit” another book but not to the extent that they detract from the plot du jour.

A) Two that I can mention are Saving Captain Cupid (a chick-lit which is set in Seattle and features a Korean American heroine) and Silent Knight (a romantic suspense involving a lost suit of armor). Following the success of our Austenesque spoofs, Hyde and Prejudice, Cliffhanger Abbey and Séance and Sensibility, we may have some future silliness up our sleeves. As for me as a solo act, I am working on three new books (including one on the craft of playwriting), as well as 13 new scripts about famous women in history for the 365 Women A Year international database. Readers can learn more at www.authorhamlett.com.

WHILE YOU WERE OUT


By Christina Hamlett and Jamie Dare
It’s one thing for Henny Tinker to think that her handsome and charismatic new boss, Geoffrey Bond, is way out of her league. The more she reflects on his secret trips and his uncanny ability to acquire never-before-seen artworks, the more she starts to suspect that he’s also – quite literally - out of her time-zone. Could it have something to do with the Scottish railway clock in his office that runs perfectly…in reverse? Is it his penchant for period outfits that supposedly coincide with the various themed costume parties he attends? Or has Henny simply been watching too many time-travel movies with her father and now seeing evidence of its existence everywhere she looks?
Her first encounter with the dashing Brit occurs shortly after she has not only been made redundant at Foyles Bookstore and lost her flat but is forced to endure the humiliation of moving back home with her daft parents. When Geoffrey appears out of the blue and offers her a well-paying job as executive assistant at his posh London office, she soon finds that she can’t imagine a more exciting – and sensually agonizing – experience than to work in such close proximity to a man whose heart probably belongs to someone else.
Against her better judgment, she begins reading deeper meaning into even his most casual flirtations and letting her imagination fantasize that being an indispensable employee is practically synonymous with getting engaged. Despite the fact that everyone around her – including her 80-year-old aunt – is enjoying a better love life than she is, Henny is determined to rise above her own klutziness and persevere against all odds.
Nor is she dissuaded by the ongoing insinuations of creepy art assessor Edward Huber that her employer is somehow involved with international theft and fraud on the black market. If anything, it makes her all the more resolute to defend Geoffrey’s wealthy lifestyle and frequent disappearances – a goal that will be put to the ultimate test when her dreamy mystery man vanishes during their first romantic date at her flat.
WHILE YOU WERE OUT is available in paperback on Amazon as well as digitally on Kindle, Kobo, iBooks, Barnes and Noble, Playster, Scribd and Tolino.


Former actress and director Christina Hamlett is an award-winning author

and media relations expert whose credits to date include 41 books, 171 stage plays, 5 optioned screenplays, and squillions of articles and interviews that appear online and in trade publications worldwide. She is also a script consultant for the film business (which means she stops a lot of really bad movies from coming to theaters near you) and a professional ghostwriter (which does not mean she talks to dead people). She and her gourmet chef husband live in Pasadena, California with Lucy, quite possibly the world’s cutest dog.


Jamie Dare is a freelance writer who in a former lifetime drafted TV ads, radio promos and corporate training materials. In

other words, content that people were subjected to against their will. In 2012, she teamed up with author/playwright Christina Hamlett for a series of “Seusspeare” comedies. This proved to be far more entertaining than writing how-to manuals, and a vibrant partnership was born. Something new is always in the works with Hamlett & Dare, from plays to contemporary novels. Ms. Dare lives in Southern California with her family.