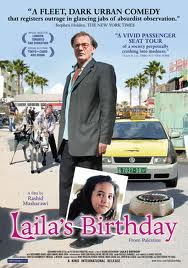 Palestinian Director Rashid Masharawi’s body of work typically consists of films that depict refugee camp life; he was born in the Al-Shati camp, located in the north Gaza strip. His films “Curfew” (1994) and “Haifa” (1996) tell the story of one family’s adversity in a tumultuous era. However, in his current release, “Laila’s Birthday,” Masharawi teams up for a third time with vet actor Mohammed Bakri in a film about modern day Israeli-occupied Palestine, told through the eyes of an everyday working man.

Husband and father Abu Laila (Mohammed Bakri) is a court judge by profession, but he cannot attain his stature due to the economic climate of his country. As a result, to provide for his family, he's forced to drive a cab through the streets of Ramallah. One morning, Laila jolts awake to start another bleak day only to be reminded by his wife that it is their daughter’s seventh birthday and he must be home by 8pm with a present and cake in hand.

Although a simple task, Abu Laila does not have the luxury of using an “off duty” sign, and encounters a difficult day as each passenger he picks up weaves a theme with a socio-political message. The helicopters hovering overhead, reminiscent of a war-torn area, make Laila’s bright yellow taxicab is a glimmer of light against the neutral tones of the stone buildings and crowded market streets. Laila interacts with controlled agitation with each passenger, employing a judicial mind-set in trying to understand the psyche of his fellow Palestinians.

Laila is told by a young couple that it is cheaper to go for a cab ride than it is to surf the Internet; he charges only 4 Shekels, which is equivalent to one U.S dollar. As he drives past a potential welfare line, a female passenger jumps out to get on line not even realizing what the line is for. Later on, he refuses to take a Nun to an Israeli checkpoint, holding that they are demeaning and problematic.
Laila has a set of rules, which he enforces. He does not allow his passengers to smoke or to bear arms. Laila's own son (Saleh Bakri) stars as an ex-convict who insists on smoking in Laila’s taxi. Later in the film, the young man is seen marching in a street protest.

As Abu Laila attempts to choose a gift and a cake, he is consistently derailed by unexpected fares, a broken down cab, and then finally the coup de grâce–a bomb explosion that sends the city in to a panic. He gets so aggravated with the daily condition that he finally has an emotional breakdown. Stuck in a traffic jam, he takes it upon himself to vent over a vehicle megaphone that is conveniently situated at the side of the road. Ironically, although the day is harrowing, Laila still manages to make it home in time with a surprise for his daughter.
Visually, “Laila’s Birthday” opens with black and white title credits and uses artfully positioned saturated colors. Depicting Ramallah’s primarily stark landscape, gleams of beauty are seen through lush trees intermittently seen through the city. Accompanied with lyrical folk music, “Laila’s Birthday” is a simple story that tackles harsh issues with sardonic wit.

Mohammed Bakri is brilliant as a representative of the working class trying to get ahead. His is an overqualified cabbie seeking a superior life. His patience wanes as he overcomes each hurdle while analyzing the idiocy of the political situation. His final outburst towards the end of the film voices outrage towards the checkpoints, towards the young men who carry guns on the streets, and towards the futility of the resistance fighters. His wife (Areen Omari), who has appeared in both “Haifa” and “Curfew,” delicately reminds her husband of the importance of family even during dark days.

The beauty of this film is the comic and dramatic timing while dealing with grim material. The world is small, and although this film is in Arabic, it portrays global economic conflicts, whether caused by occupying country, overbearing government, or the internal struggle of one’s self-worth.

Winner of the Mustafa Akkad Prize at the 2009 Fajr Film Festival (Iran) and the
Silver Screen Award for the Best Asian Feature Film at the 2009 Singapore Film Fest, “Laila’s Birthday” is a 71-minute-long social message feature, told with sardonic comedy and familial storyline. Viewers will not be turned away by the film's serious theme and should be able to easily identify with the desire for a better life.