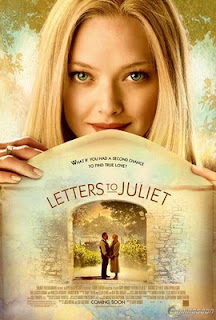 Set amidst the background of Tuscany, Sophie (Amanda Seyfried from Mama Mia!) and her fiancée take a pre-honeymoon trip to Verona, Italy because both will be too busy after the wedding to take time off. And it’s a good thing they do, because it broadcasts how each pursue their passions, indifferent to each other. Sophie, a writer, discovers the “Secretaries of Juliet”, a group of women who collect the letters written by women who visit the famed Juliet’s balcony and statue, asking for love advice. These women devote their lives to giving all types of love advice.

With her fiancé off finding new wines and foods for his up-coming restaurant, Sophie decides to help answer the letters, and finds a letter written in 1957 wedged behind a stone, left unanswered. The letter is from a girl named Claire Smith (the amazing Vanessa Redgrave) who had been too overwhelmed by her love for a boy named Lorenzo, and leaves him behind. Moved by the regret in the letter, Sophie answers it. Low and behold, her letter finds Claire.

And so the movie takes us on a charming adventure of two women at different points in their lives, rediscovering true love. Claire, as she searches through Tuscany, trying to find Lorenzo after fifty years, and Sophie as she falls for Claire’s ill-tempered straight-laced grandson, Charlie. Charlie doesn’t believe in his grandmother’s quest, doesn’t really believe in love, but over the course of their travels comes to discover the miracle of one’s soul mate.

The only problem to find is using the suspension of disbelief that a letter mailed to a “Claire Smith” fifty years later would find its way to the original owner, but that’s a very minor moot point.

I have been fortunate enough to visit Verona and Juliet’s garden, and while as lovely and charming as depicted, there were little things off from how I remembered it. Not many people would realize that it is expected to cup Juliet’s right breast for a photo-op, ensuring good luck in love, so that may seem odd to some. And while I don’t know if there really is a “Secretaries of Juliet” society, it certainly is a beautiful concept.

All in all, this move was one of those romantic, feel good films that’s perfect to curl up with on either a hot day or cold night.
Posted by Beth D. Carter at 7:29 PM