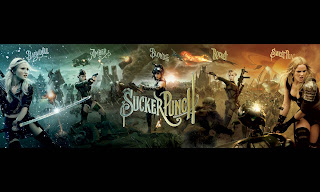 There have been some negative reviews on this movie, and I think they come about from not truly understanding this film. Yes, its part anime, part video game, part fantasy, part steampunk, and part over-the-top drama, but at the core of it, Sucker Punch delivers a helluva ride.

The film starts out in a tech-noir type feel with Babydoll’s mother dying, leaving behind two daughters with a stepdad that is a lecherous old man. He goes after the younger sister, locking Babydoll away, but our heroine is fearless and brave. She shimmy’s down the drainpipe, runs back in the front, finds the stepdad’s gun and bravely goes to save her sister, only to accidentally shoot and kill her sibling.

Babydoll is taken away to a mental institute where the stepdad buys off the orderly to “send her to paradise” via a lobotomy. Babydoll has five days. Thus sends her off into a fantasy world to escape, literally, the crazy house via a journey of collecting five things that will help her in her quest for freedom. Babydoll transports her mind into a world where she has been sold into a brothel and she must dance to survive. We never see these dances but we know they enchant men who watch her. While she “dances” she goes into a fantasy world of WW1 trenches, fighting a fire breathing dragon, and stealing a bomb from a train. These fantasies are larger than life, including the four women who join her: Amber, Blondie, Rocket and SweetPea.

Now, this is where I think a lot of critics don’t understand who these women actually are and here’s my two cents…these friends are actually a personification of Babydoll’s psyche. She takes them with her on these fantasy journeys to escape the reality of being locked in a mental asylum with the threat of a lobotomy hanging over her head. I won’t divulge the ending, I don’t want to spoil it, but suffice to say that it is both tragic and sweet at the same time.

This movie wasn’t perfect. There were several things that could have been changed to make it a great film, and again, I can’t really go into it because that would reveal too much of the ending. But how can you not love a film that has badass girls wielding katanas and machine guns dressed in corsets and black leather? It was fun, it was entertaining, and it gave my imagination a jumpstart. I recommend seeing this film in the theaters to give the CGI and sound mixture its proper due, but don’t sit in the front row because you’ll give yourself a headache. And don’t be expecting an Oscar worthy script, like I said there are flaws and there are holes, but do expect to leave the theater thinking you’ve seen a helluva ride!
Posted by Beth D. Carter at 9:29 PM